We've been going back and forth about starting up potty training since Clay was about 18 months old. I put out the potty to get him "interested" when he started telling us he had pooped, like we didn't know what he was doing squatting in the corner... Then he started taking off his diaper (only lee diapers, praise The Lord)! But it's been mostly me wanting to jump into it and everybody else saying he's too young.

We've talked about the potty, he goes with us when we go, he says, "go potty," but when you put him on the potty? Tears. Floods of tears. So we tried a potty seat on the regular toilet. Same thing. Those tears. Big crocodile tears.

Finally I decided, around the time he turns two, we'll start getting serious. That's when he moves up to the 2's class at daycare and they start potty training then so it will be perfect timing. The plan was to do the three day boot camp where you do nothing but clean up pee and count down the hours til you get wine. There were a few problems with that plan:

Then this weekend I realized we were low on diapers. I.hate.buying.diapers. So when Clay got up from his nap on Saturday, I said, "hey, Clay, do you want to wear your Elmo undies?" I'm 99% sure my child doesn't know what undies are but he certainly knew who Elmo was. On they went.

We played in the kitchen with his cars, we played with playdoh while he sat on an easily cleanable chair, he stood at his kitchen awhile. He pooped once but it was a solid one so I took it as a learning experience and we went to the potty and dumped it in and wiped and flushed and washed out hands. I thought for sure the pee was coming. Nope, not once until he went in his diaper before bed did he pee. I offered the potty. Tears. That little booger held his pee. 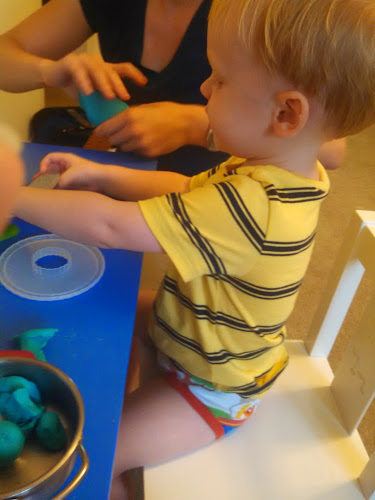 On Sunday we had an hour or so before we had to leave so I propped him up with water, fresh undies, and a waterproof pad to watch Planes. An hour later, dry underwear. Tears on the toilet. Then the whole day went south when Clay fought a nap for three hours. So obviously trying undies again was not on the agenda for Sunday.

So that's where we are.

My thoughts/questions: it's good that he can hold it and knows not to pee in his undies, but is that healthy? Should I load him up with juice and water next time so he has to go? How do we get over the crying on the potty?? HELP!

Posted with Blogsy
Posted by Jess @Adventures in Ginger Mommyhood at 1:24 AM

Little K could go she just didn't want to until she was three and a half. He'll get the hang of it, just hang in there!

I have four words for you: I feel your pain. I knew this wasn't going to be easy but I had no idea of the extent to which this would challenge us. We've been at this for about 4 months now and it's definitely gotten better but we're still not there yet. I knew having a stubborn kid would come back and kick me in the ass.. I just didn't realize it would be sooner rather than later.

We haven't entered potty training territory yet (we're kind waiting until he can communicate better) but my hunch is it's a good sign that he recognizes he shouldn't be peeing in his undies. So I guess the real struggle is finding a way to make the potty less scary for him. Maybe there are fun youtube videos you could watch that make the potty seem fun instead of scary? That's probably where I'd start!

Go On An Adventure